Coastal inundation and aquifer salinization are well recognized impacts of sea level rise. Less recognized is that sea level rise can push water tables above the land surface to flood low-lying depressions (referred to here as groundwater inundation). Newly-formed lakes and wetlands are part of the groundwater flow system and their evaporation lowers water tables, reorganizing and shortening groundwater flow paths. Impacts from groundwater inundation and evaporation will be most intense on low-lying carbonate islands, where the Ghyben-Herzberg relationship results in losses from freshwater lenses (the primary freshwater resource) being 40x the lowering of the water table. Primary controls on groundwater inundation will be sea-level rise and island topography, but impacts to freshwater resources could be moderated by climate (precipitation, and evaporation), aquifer permeability, ratio of groundwater contributing area to lake surface area, and distance between lake and coast. Pioneering modeling work showed climate is a critical control on the impact of surface water evaporation on freshwater lenses. This work predicted fresh lakes and continuous lenses in humid regions but hypersaline lakes and discontinuous lenses in arid climates. However, islands in the arid southern Bahamas have lakes ranging from fresh to hypersaline. This paradox between modeled and observed lake salinity underscores our lack of understanding of groundwater inundation on freshwater lenses. Therefore, during this project, new field data will be collected, and new transient modeling tools will be developed, to test the overarching hypothesis that groundwater inundation will reduce freshwater lens volumes through interactions of lake area relative to its groundwater contributing area, degree of connectivity between lakes and ocean, and dynamic interactions with climate and sea level change. 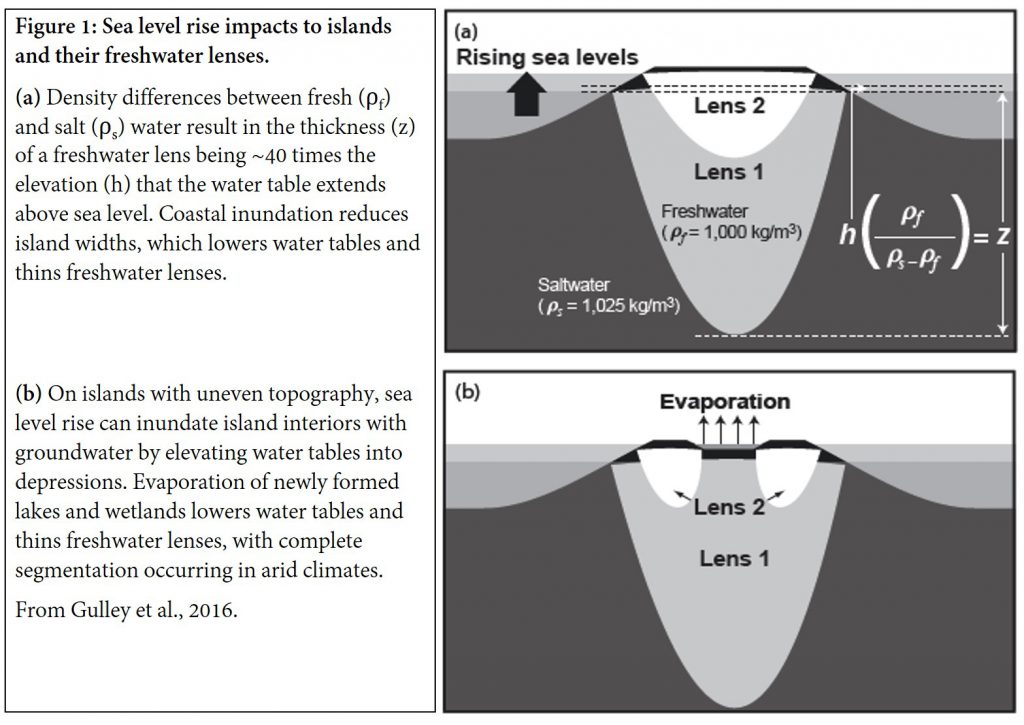 This study will improve predictions of freshwater resource loss of Small Island Developing States (SIDS) from groundwater inundation, perhaps the primary environmental factor triggering their loss of habitability. The modeling tools (SEAWAT Lake Package) to be developed here will be freely distributed to the hydrological community. A field hydrogeology curricular exercise, with learning outcomes of quantitative coastal hydrology, will be developed to be used by the more than 100 student groups that visit the Gerace Research Centre (base of operation for this project) each year.