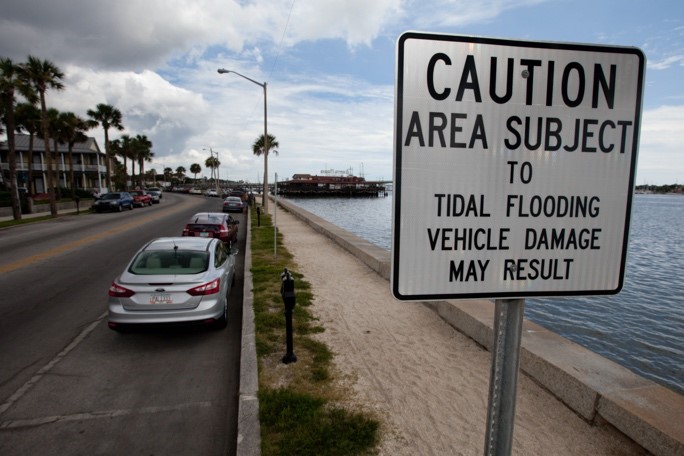 Not Just a Visitor: How Florida Coasts are Preparing for Climate Change

When Henry Flagler eyed St. Augustine, Florida, for development in the late 1800s, he didn’t just see a wetland-shrouded expanse. Instead, the entrepreneur envisioned the vacant lands as opportunity, and eventually built several historic hotels that still stand today.

But Flagler couldn’t have anticipated how climate change would one day threaten to reclaim the landscape.

This was the saga the city’s chief resilience officer, Michael Cullum, recounted to a room packed for his presentation at the University of Florida campus on Feb. 26, the second day of the 2020 Water Institute Symposium.

A seawall lines a pedestrian and bicycle path in St. Augustine, Florida. The old historic seawall was 4.5 feet tall, while the new one is built to 7 feet tall, Cullum said. (photo courtesy of Michael Cullum, City of St. Augustine)

“He was ahead of his time in terms of being an insightful developer,” Cullum said about Flagler’s choice to develop on top of wetlands, prompting chuckles and laughter. “And now, we’re paying the price for it.”

No, not as a fashion statement, he said, but to trudge to their cars during multiple flooding events – around 25 each year – that drench the city.

The room, full of experts in all topics related to Florida’s water resources, fell silent. “Good Lord,” a woman in the front row murmured.

This reality has rippled across the state in recent decades because of climate change. The threats compound as the force continues unchecked: Rising water levels scrape against the coastlines; temperatures fluctuate outside their norms; extreme weather rocks the earth.

Cullum was among a cohort of presenters from other coastal cities – each of whom has a unique strategy to adapt to these risks.

For St. Augustine, Cullum said one of his goals is to protect the oldest part of the nation’s oldest city: the 200-acre plot of land downtown that houses Flagler’s hotels.

Their solution, named the “Lake Maria Sanchez Flood Mitigation and Drainage Project,” will be a series of improvements to the city’s storm sewer piping. The project calls for pump stations that direct the system’s liquids, gates that keep tidal waters flowing in the right direction and installation of bulkheads that block flooding. Each component will hopefully mitigate the nuisance floods that make employees break out their rain boots.

This is just one of the projects on Cullum’s hefty plate. His appointment in 2018 as chief resilience officer was not only a first for St. Augustine, but also for all of northeast Florida. The position has existed in South Florida for years.

He attributed the delayed development of the role to the area’s “false confidence” due to a half-century gap between any extreme weather events, from Hurricane Dora in 1964 to Hurricane Matthew in 2016. 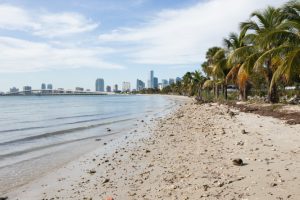 Miami, Florida, looms in the background of Virginia Key beach. Miami-Dade is one of the four counties in the Southeast Florida Regional Climate Change Compact. (photo courtesy of UF/IFAS)

“Southeast Florida is way ahead,” he said in reference to the Southeast Florida Regional Climate Change Compact. This four-county agreement was created in 2010 to “coordinate mitigation and adaptation activities across county lines,” according to its website.

“They’ve suffered significantly more than North Florida has, so they needed to be ahead,” Cullum said about climate change’s imbalanced impacts.

Broward County is one of the four counties participating in the Southeast Florida Regional Climate Change Compact. With its low and flat lands, it has increased chances of flooding due to higher sea levels in the future, said Jeremy Decker, a hydrologist with the U.S. Geological Survey in his Water Institute Symposium presentation.

Experts have projected a 14- to 34-inch sea level rise along the county’s coastline by 2060, he said. This sobering prediction called for a comparable counterattack to bolster the county’s vulnerable coastline. 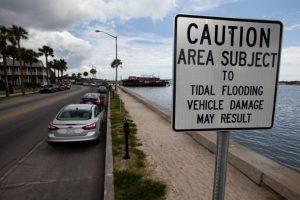 Florida’s coastal communities are accustomed to tidal flooding. This sign in St. Augustine’s historic district warns of the potential for flooded conditions. (photo courtesy of UF/IFAS)

Decker’s team is now developing a surface water and groundwater flow model that maps drainage capacities and flooding potentials throughout the county. These simulations can help officials proactively anticipate and fortify against threats like sea level rise and changes in precipitation, he said.

On the opposite side of the peninsula, Tampa Bay will endure an estimated 2- to 8.5-foot sea level increase by 2100, said presenter Ivana Kajtezovic, Tampa Bay Water’s planning program manager.

This looming threat presents challenges to the area, which in 20 years will need an additional 20 million gallons of water per day, she said. This estimate is likely based on the projected demands of an ever-growing population.

But the increasing water demand intersects with the growing fear of damage to its supply sources and system infrastructure due to climate change. Because of this junction, Tampa Bay Water completed a hazard impact analysis on its potential future water supply sources.

Of 10 sources evaluated, four water plants or facilities face “high vulnerability” in the wake of a violent hurricane, Kajtezovic said. The plants would be rendered useless if underwater.

This vulnerability prompted much-needed action to protect these resources. The company is awaiting approval to form a climate resiliency plan, which Kajtezovic said must adapt to an uncertain future. This would plan for “future demands, conservation potential, supply reliability, water shortage” and more, according to a post on the company’s blog.

“Our life spans are very, very short compared to these geological processes that have been going on for millennia,” she said. “We are going to face that.” 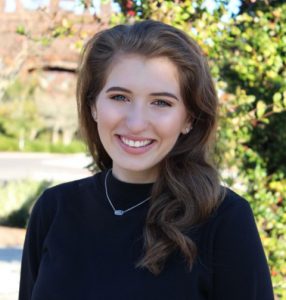 Brittney Miller is an undergraduate student at the University of Florida pursuing a dual-degree in biology and journalism. She has worked in both research labs and newsrooms throughout her collegiate journey – a background that has cultivated her unique and rich passion for communicating science, she said. With clips published in WUFT News and the Independent Florida Alligator, she aspires to continue her reporting path to be a science writer. She currently interns at the UF Thompson Earth Systems Institute to promote science communication and education. (Twitter: @brittneyjmiller, Website: https://www.floridamuseum.ufl.edu/earth-systems/brittney-miller/)